Portland sits on Maine’s southern coastline. Portland is one of those cities whose people and history have been shaped by the sea. It is also a city whose character has been forged by fire. In 1676, Native American raiders burnt the settlements here to the ground. 14 years later, they returned with the French to torch it again. Despite all these, Portland has refused to lie down, and it is now one of the most livable and dynamic small metros in the US. Here are the top must-see attractions in Portland, Maine.

One of this city’s greatest charms is its working waterfront. Amble down this street and spend some hours drifting around the many piers and wharves. As the fishermen unload their daily catch, relax with a lobster and craft beer or you can watch as the wooden ships set sail to the nearby islands and as the cargo ships glide to ports far away. You will find many of Portland’s finest churches here. It was also here the city’s merchants and the city’s shipbuilders built their stately homes.

Tour the ornate rooms of this mansion which is the summer home of Ruffles Sylvester Morse, the 19th-century hotelier. In 1940, this mansion was almost demolished to build a gas station. Thankfully, common sense eventually prevailed and this historic home and its original interiors were spared. 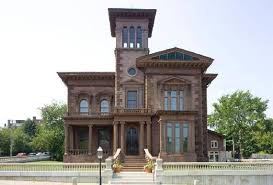 Henry Wadsworth Longfellow was one of America’s most loved poets. You will get the see the hobbyhorse he rode into imaginary worlds and the desk he honed his lines. The Wharves and woodlands of Portland inspired many of these desks.

The Arts District is along Congress Street. It is an area filled with creative enterprises. The Portland Museum of Art is at the center of it all. In 1908, it started life at McLellan House but over the years new buildings were added and the collection had swelled. Portland’s coastline inspired many of the artists whose works feature here including Winslow Homer and Longfellow.

The ever-present cry of galls in Portland is a constant reminder that the sea is nearby. Head to Eastern Promenade to see the parklands that have provided the locals with a place to take in the Atlantic breezes and stretch their legs.

This has been a long-time favorite of many US presidents. This resort town serves the most beautiful coastlines, classiest shopping, and the best eating in Maine.