Skip to content
See the most of Rome in a day

Rome is located in the region of Lazio south of Tuscany where you can find Florence and north of Campania where you can find Naples and the Amalfi Coast. Rome has an abundance of historic daring from its Ancient Past, to the Italian Renaissance of the middle ages scattered within the city, making it hard to know where to start your tour. Rome is quite a large city and it order to really uncover its beauty and magic, you’ll need to spend at least two to three days in it. But if you don’t get the luxury of exploring Rome for longer than a day, then we’ll try to make the best out of what you have and show you the most of Rome in as little as a day. 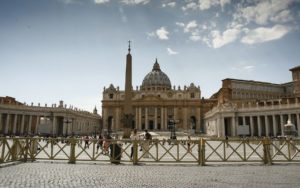 Vatican
The best place to kick of your day is in the Vatican, if you don’t have the privilege of a transport vehicle, you can take the train from the Termini Metro station to Ottaviano, which will take you around 20 minutes. If you want to do things right in so little time, purchase a tour of the Vatican Museum, this way you will see all the most amazing masterpieces, hear amazing stories about the artist and not get lost in this massive complex. While being in Vatican I recommend you see the Sistine Chapel, Raphael Rooms and St. Peters Basilica, where you can climb up to the top for an amazing view.

Spanish Steps
To reach the Spanish Steps, just take the metro line A, back three station, which will take you around 5 minutes. Created in the 18th century, the Spanish Steps are located in one of Rome’s most desirable neighborhoods, directly in front Via Condotty, a world-renowned street famous for being the home of some of the most highest, of high-end brands. 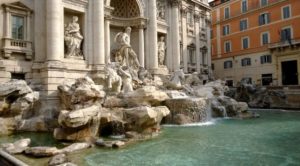 Trevi Fountain
A short walk from the Spanish steps you’ll find the possibly the world’s most beautiful and recognizable fountains, Fontana di Trevi. It was built in the 18th century by architect Nicola Salvi and if it wasn’t so crowded night and day it would be Rome’s most romantic sight. It’s a popular tradition to throw a coin over your shoulder in the fountain and make a wish, approximately 3.000 euros worth of coins are throw each day in the fountain. 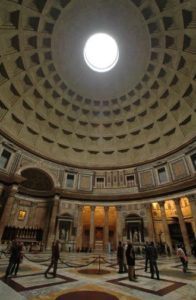 Another short walk down the street and you’ll find yourself facing the oldest and most impressive building in Rome, the Pantheon. This ancient structure dates back to the 2nd century AD, it was commission by the great Roman Emperor Hardian and the architect is unknown. The dome is still to this day the largest concrete dome in the world and it is often argued among scholars that it’s one of the most preserved structures from antiquity. This spectacular masterpiece features tombs of Italian icons like King Victor Emmanuel, Raphael, highlighted by the oculus, the hole in the roof.

Piazza Venezia and The Victor Emanuel Monument
On your way to the Coloseum you’ll be in Piazza Venezia where you can find The Victoriano and Trojans Column. The Trojan’s Column is an incredible structure, depicting Trojan’s conquest and victory over Dacia and is by far the most impressive feat of architecture in the area. The Victor Emanuel monument is one of the most visible buildings in the city of Rome being the city center piece. It was inaugurated in 1911 to commemorate Victor Manuel II, the first King who unified Italy. Since 1921 the monument holds the Tombs of the Unknown Soldier and has the Eternal flame of Rome which goes back from ancient Roman legends. 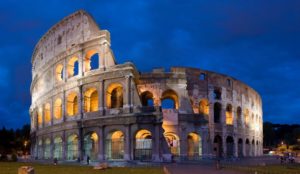 The Colosseum
From Piazza Venezia you’ll be able to see one of the original 7 World Wonders and the most iconic landmark of Rome. The Colosseum is one of the “must see” places in Europe, let alone Rome, this architectural masterpiece was built 2000 years ago and it inspired so many different cultures and eras of mankind, once providing bred, wine and blood to Ancient Romans, shelter to the people of the middle ages and inspiration materials to the artist of the Renaissance. With such a tight schedule, the key for planning a visit to The Colosseum is skipping the line and you can do that either by buying your ticket online or booking a tour in advanced. If you’re left with a little bit of time I recommend visiting Palantine Hill as your ticket to the Colosseum grants entrance to this place as well.